In this guide, I will show you how to lock and unlock both character and worlds.

I have created a simple Avoidance game using the below options. 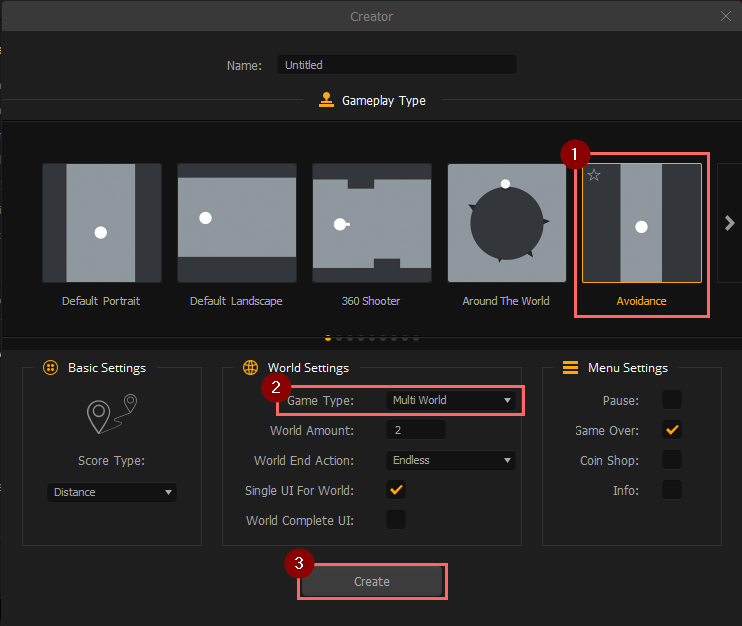 Once done, it will take you to this page. Click on the Menu Editor button in order to see the Game Mind Map.

Then click World Select UI to be able to edit it. 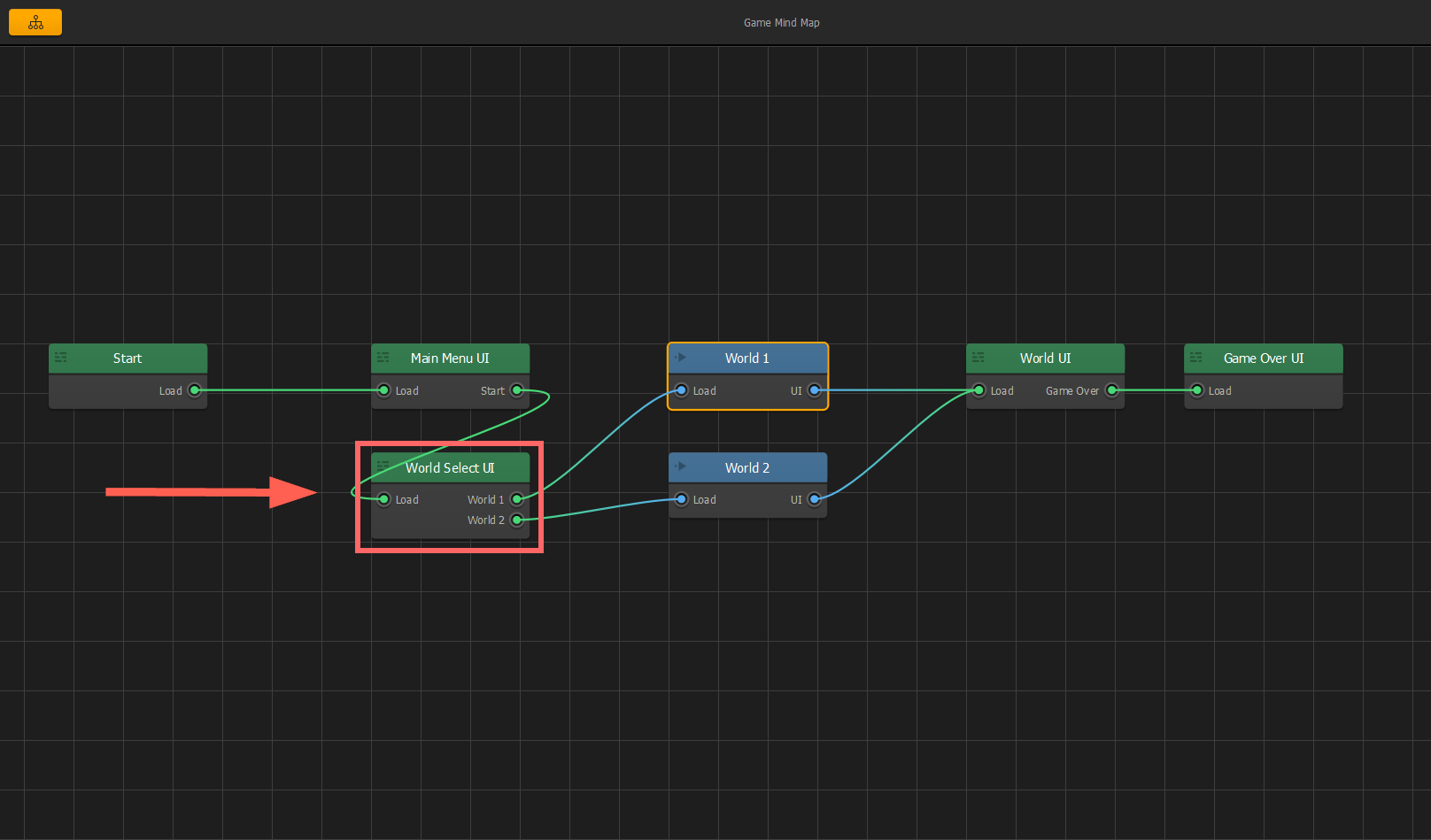 To lock world 2. First step is to click and delete it. 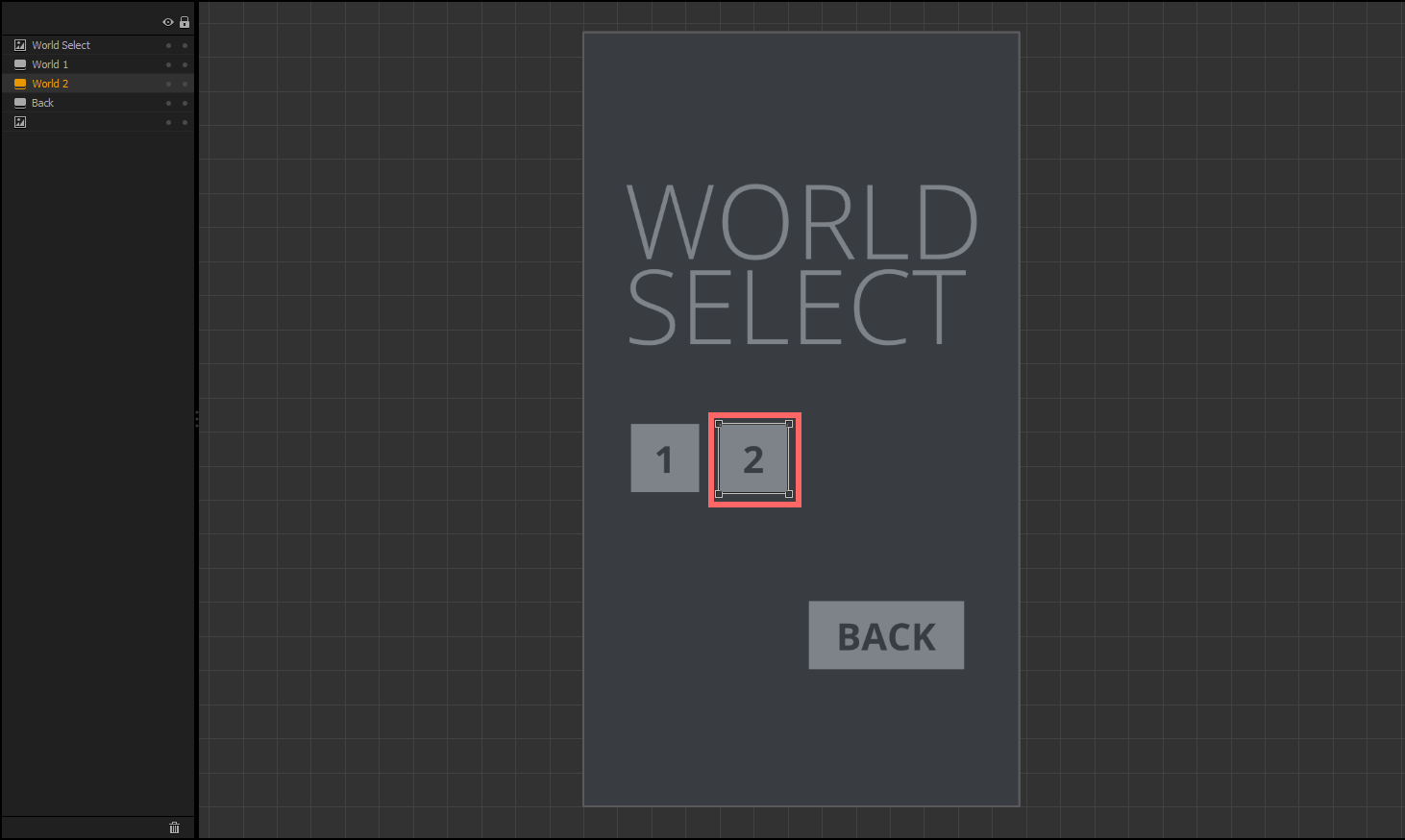 Under the Buttons category, drag and drop the Lock button to where you previously have World 2. 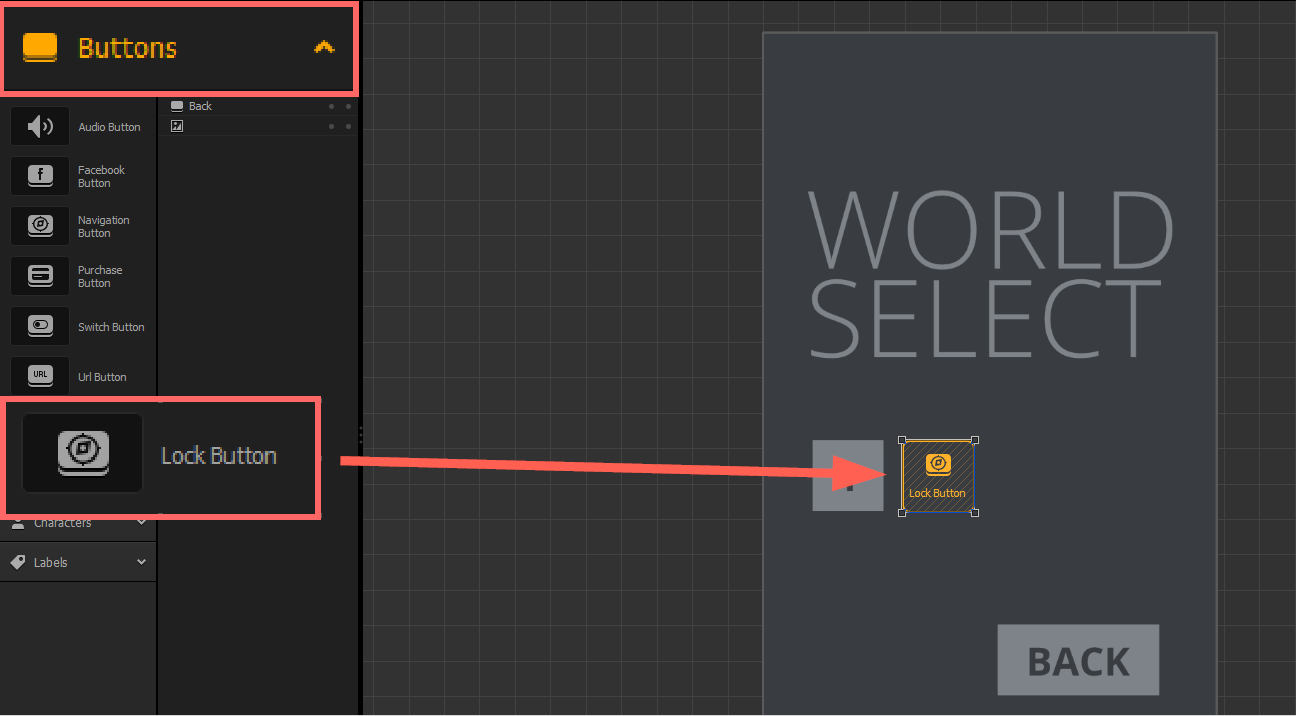 While the Lock button is selected, change its name to your desired world name. In this instance "World 2", then drag and drop your World 2 image and include a locked image for it. 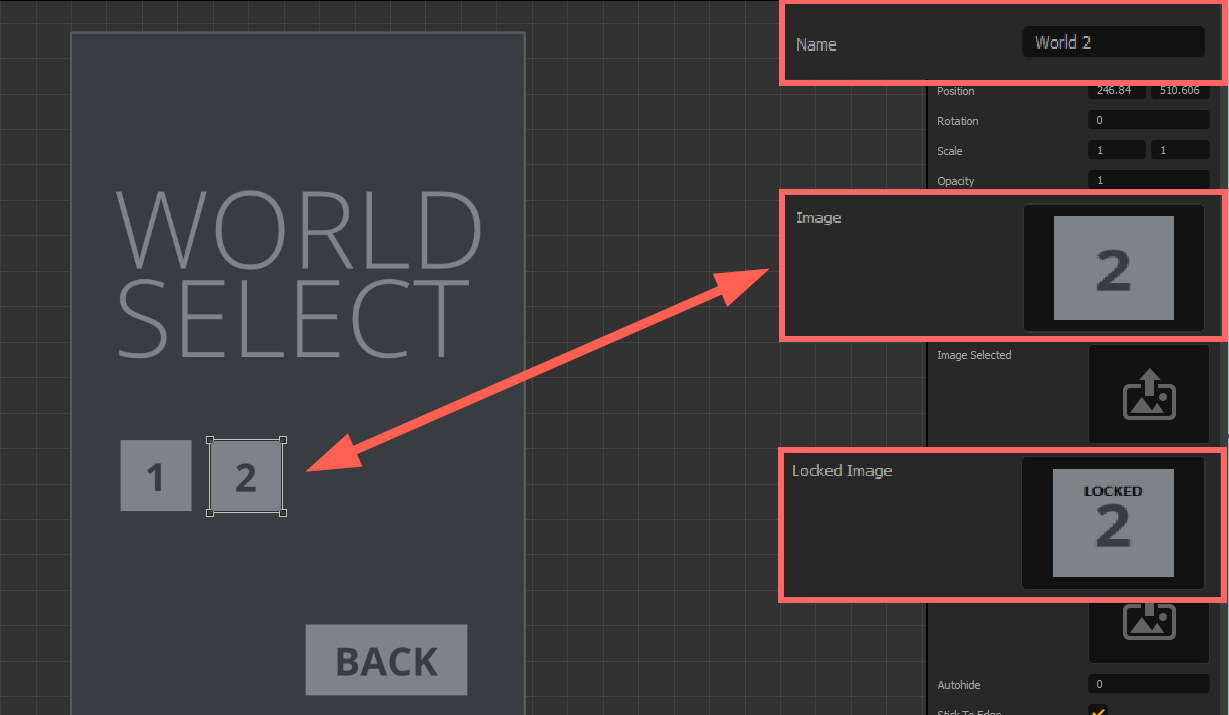 Now lets click the Menu Editor button to go back to the Mind Map and connect the World Select UI to World 2. 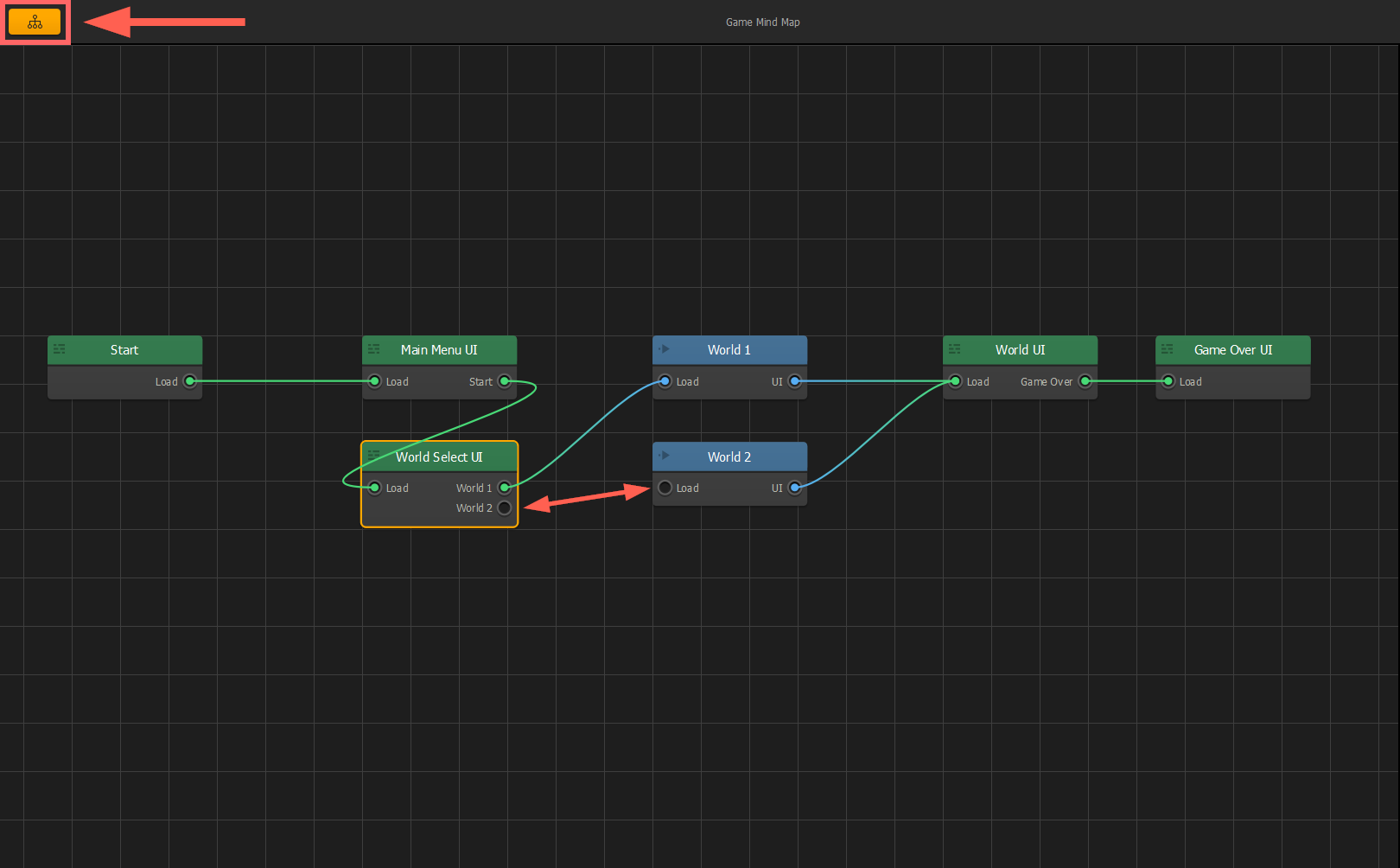 When you preview your game, you will see your World 2 is locked. 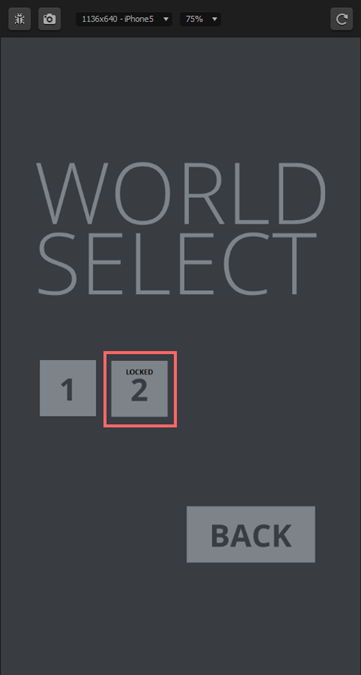 Now let us go over the Unlock functions of the Lock Button.
Default - You will have to use an Unlock Logic Piece to unlock.
In Game Currency - Unlock using coins collected in the game.
In App Purchase - Unlocking using an actual money. 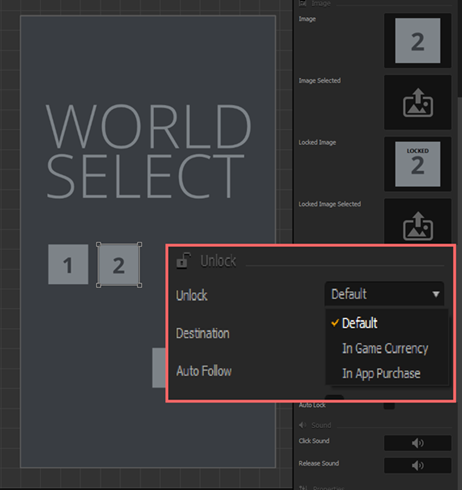 In this guide, we will use the default option to unlock World 2.

Inside World UI, drag and drop Event observer and name it Win Game. 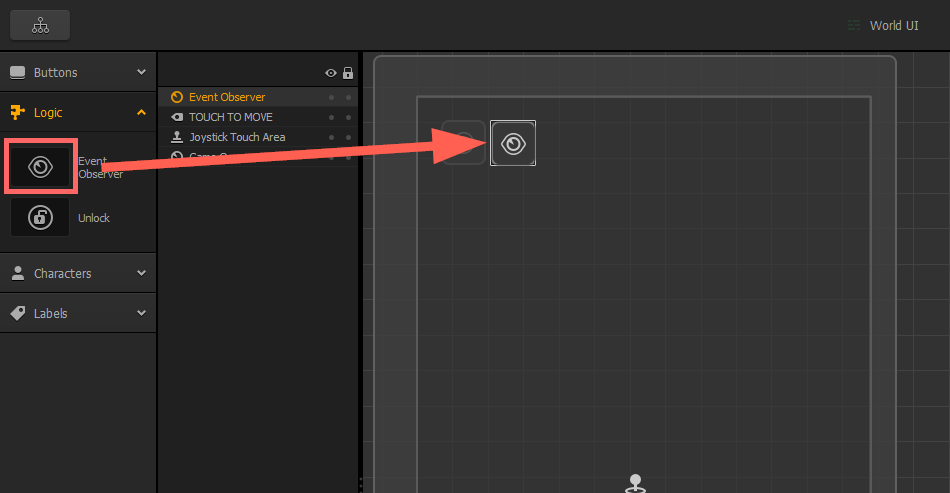 In this instance I have selected to win the game by going to the distance of 1500 pixels as shown in the image below.

Let us go back to the Mind Map and right click to create a new UI.

Double click on the newly created UI to open it.

Once we have it opened, Let us drag and drop Navigational Button, Unlock Logic and a Label in the middle.

In the image below, I changed the label name.

And changed the settings of the Unlock Logic by selecting the options below.

I also included a button to go back to the world Select UI.

When you complete World 1, you will see a message saying that you have unlocked World 2 and an option to Select World. 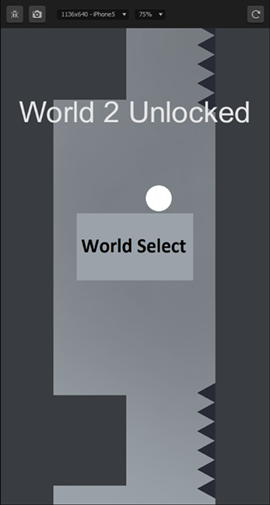 And find an option to play world 2. 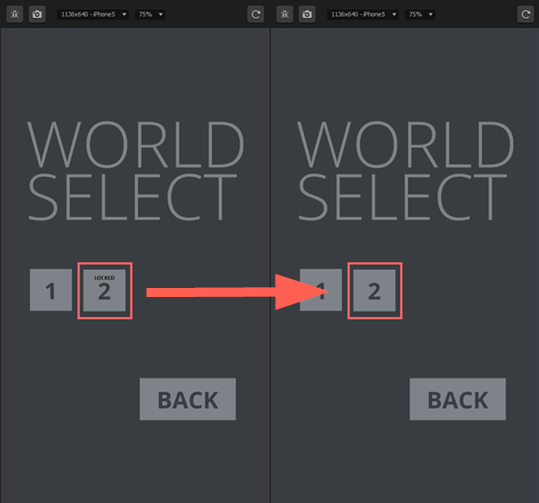 Under the Buttons category, drag the Navigation Button to where you want to put it. 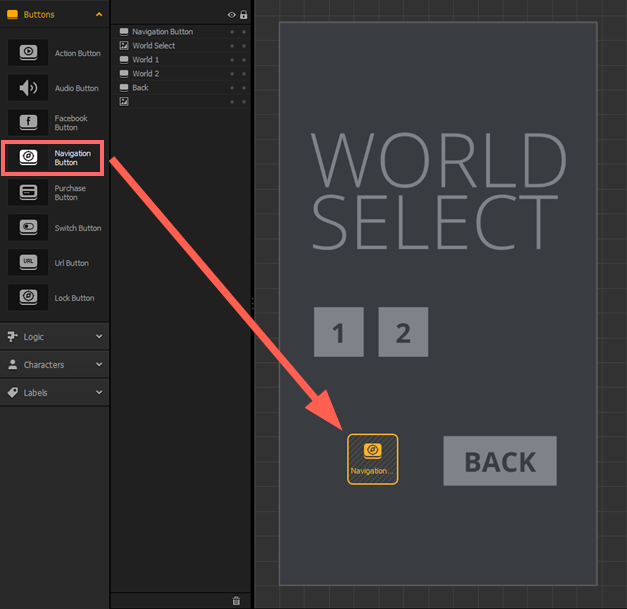 Then change the name and drag an image for it. 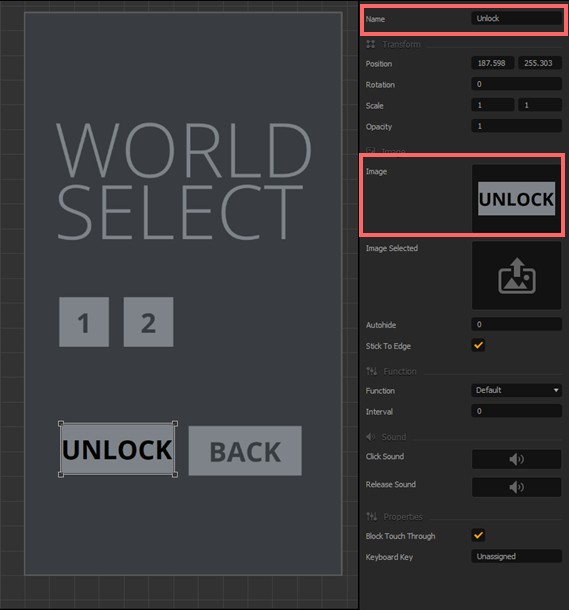 Once done, you will see a new UI. Change its name on the right hand portion. In this instance, I named it Unlock UI.

Now make sure that you link the unlock ports. Let us double click the World 1 so we can start making characters to unlock.

Inside the world, the easiest way to create a new character is to click on your character and press D on your keyboard.

It will then duplicate your character. Now, select your duplicated character and change its name and image. 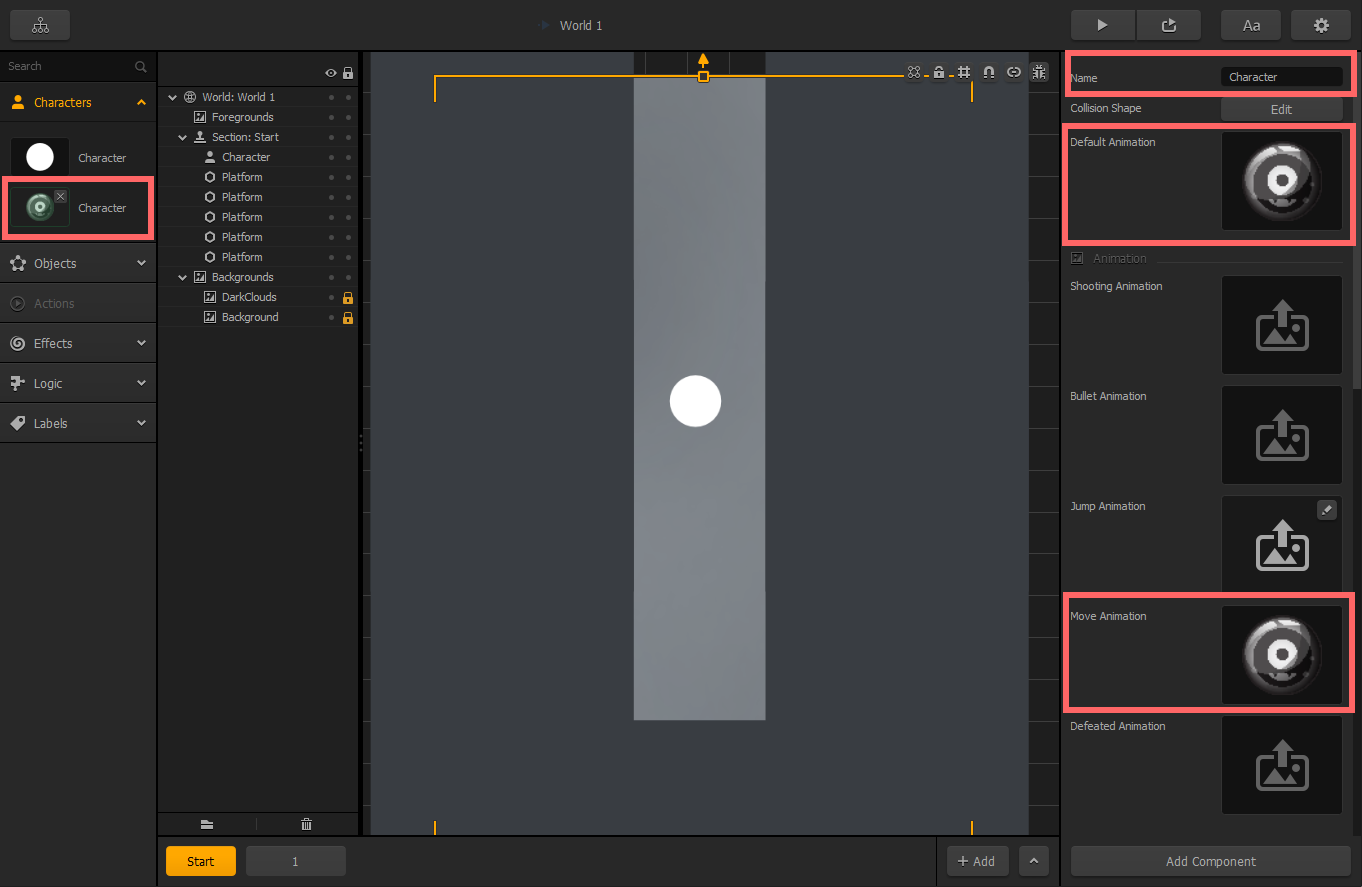 In that same panel, you will also see the option to use In Game Currency as your purchase method. I set it so you can unlock by purchasing using 10 coins.

You can also create as many character as you want. 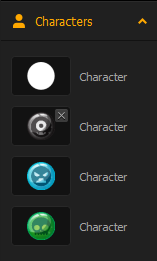 Now lets go back to the world UI that we created and create selection for our characters. Double click on the Unlock UI.

Then go to the Characters category and drag and drop Multiple Unlock since we have multiple characters to unlock. Make sure to widen the area so you can see all your characters. 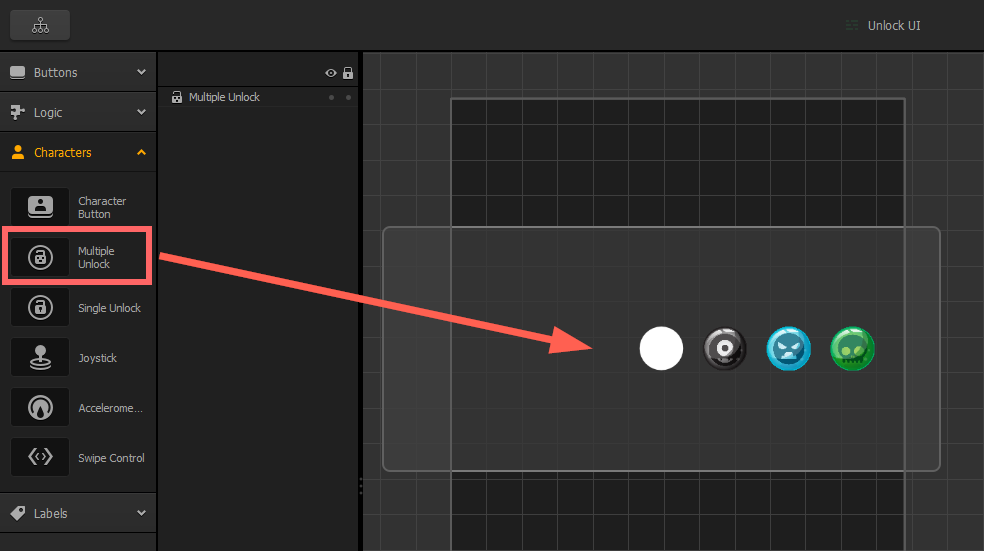 Dont forget to put a lock in the unlock area. 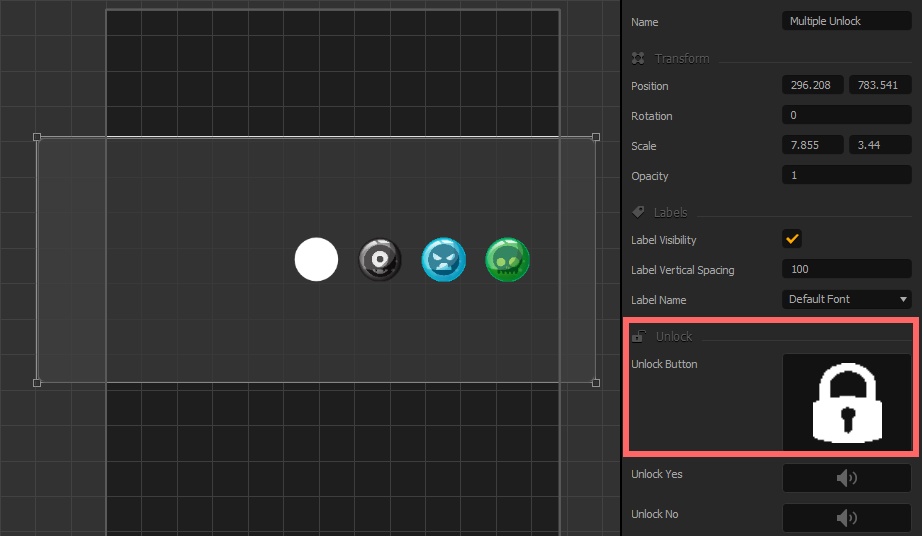 Now drag and drop a Navigational Button to your desired area and put an image to it. 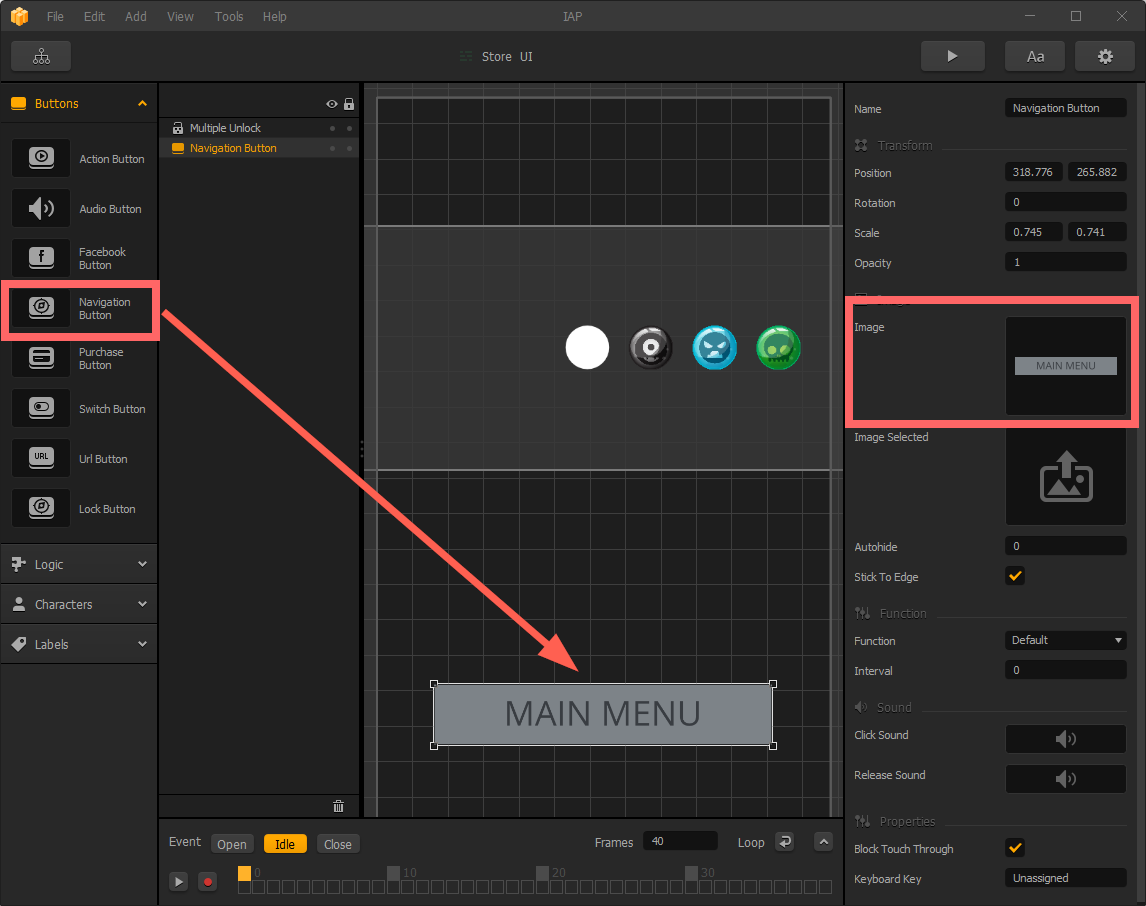 And then link it to World Select UI so you can go back to your world selection after selecting a character.

Now when you preview your game, you will see that the additional characters are locked until purchased. 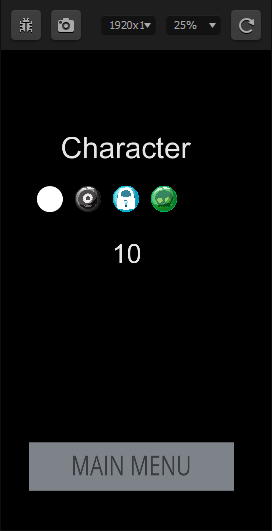 To unlock these characters, we need to build an in game economy by using a coin to collect. To do that, let us drag and drop a coin image to the actions option of the Buildbox wheel. 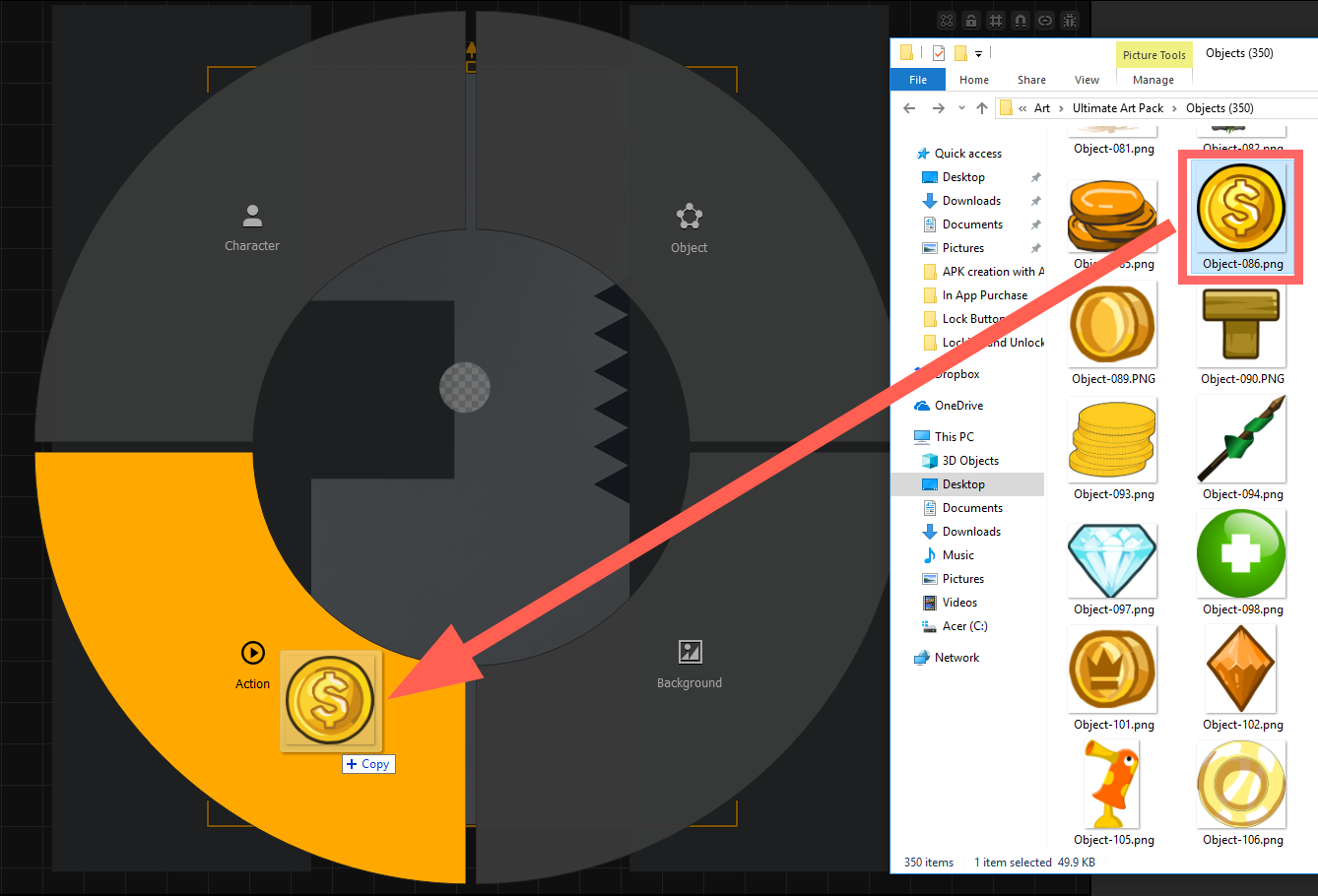 Adjust the size and duplicate it as many as we want by pressing W,A,S or D keys. 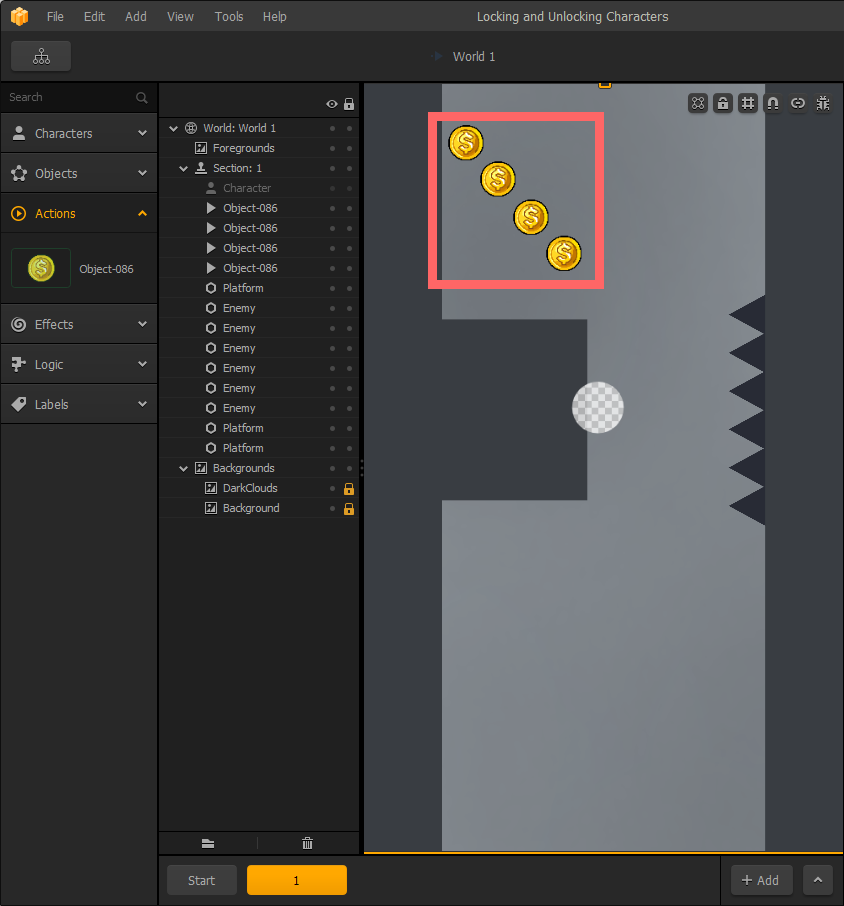 On the options panel, change the name to Coins, action type and other options are as follows.

Now let us create a way to track our collected coins by going to the Menu Editor and opening World UI.

Once inside World UI, drag and drop Default Font under the Labels category and select the following options found in the right. 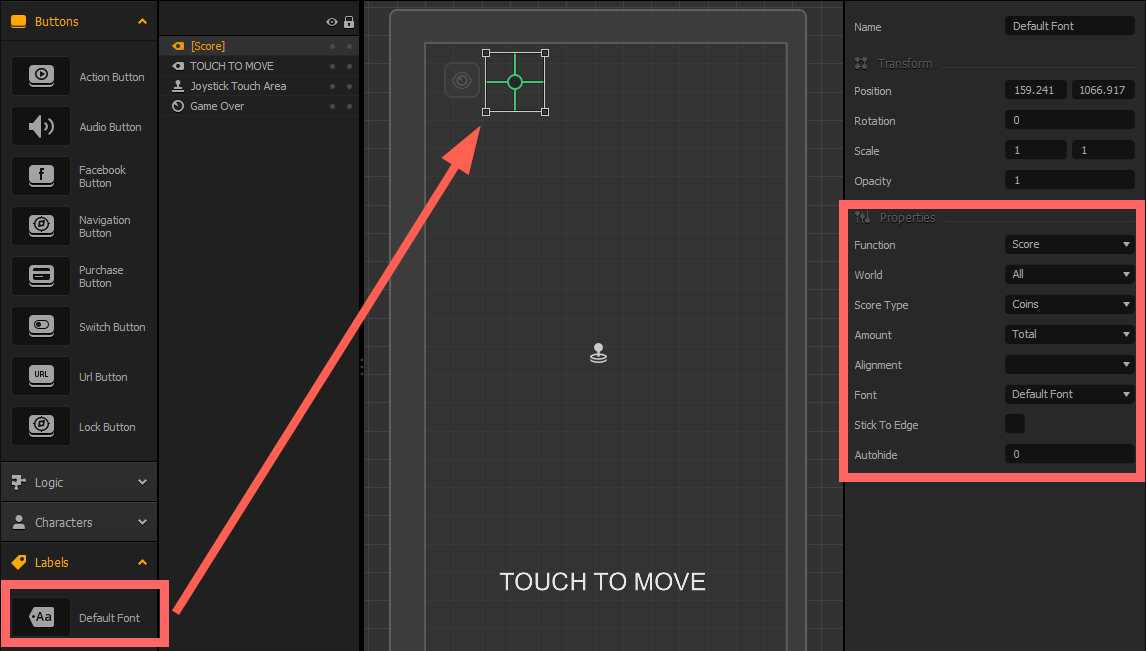 Now when we preview our game, we will see that we have a coin counter on the upper left hand side of the screen. 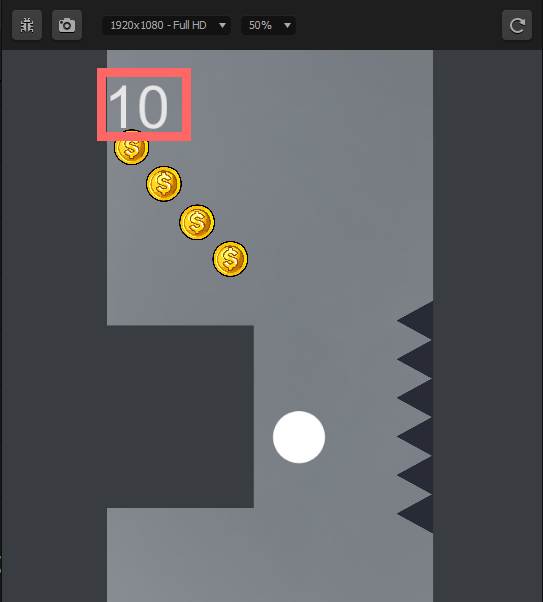 And have the ability to unlock locked characters. As you can see, there are no locked icon on the characters. 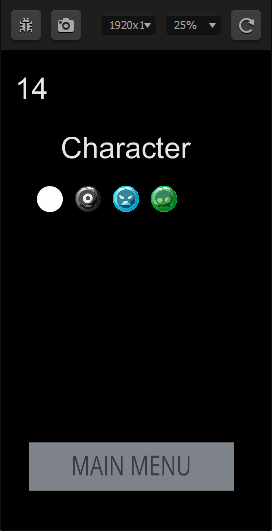